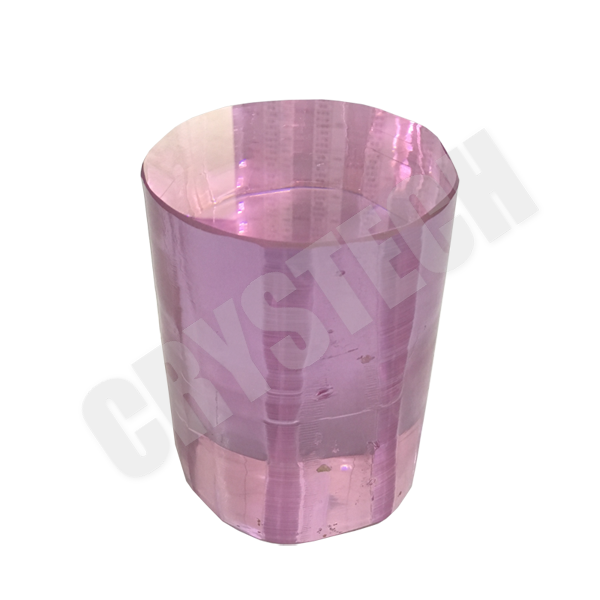 Good price and quality Alexandrite rod refers to a crystal material that can convert the energy provided by the outside world into a highly parallel and monochromatic laser that is coherent in space and time through an optical resonator. It is the working substance of the crystal laser. The laser crystal consists of two parts: the luminescent center and the host crystal. The luminescent center of most laser crystals is composed of activated ions, which partially replace the cations in the host crystal to form a doped laser crystal. When the activated ions become part of the host crystal composition, a self-activated laser crystal is formed.
The active ions used in good price and quality Alexandrite rod are mainly transition metal ions and trivalent rare earth ions. The optical electrons of transition metal ions are 3d electrons in the outer layer. In the crystal, this optical electron is easily affected by the surrounding crystal field, so its spectral characteristics are very different in different structural types of crystals. The 4f electrons of trivalent rare earth ions are shielded by the 5s and 5p outer electrons, which weakens the effect of the crystal field on them, but the perturbation effect of the crystal field makes the originally forbidden 4f electron transition possible, resulting in narrow-band absorption and fluorescence spectral lines. Therefore, the spectrum of trivalent rare earth ions in different crystals does not vary as much as transition metal ions.
The matrix crystals used in good price and quality Alexandrite rods are mainly oxides and fluorides. As a host crystal, it requires stable physical and chemical properties, easy to grow large-size crystals with good optical uniformity, and cheap price, but the adaptability between it and activated ions should be considered, such as the radius and electronegativity of matrix cations and activated ions. Sex and valence should be as close as possible. In addition, the influence of the host crystal field on the activated ion spectrum should also be considered. For some host crystals with special functions, activated ions can directly generate lasers with certain characteristics after doping.
Composition and application of laser crystal rod
A crystal that emits laser light is a laser crystal. Laser refers to the use of most particles in the working material in the excited state, and the use of external light induction, so that all the particles in the excited state can simultaneously complete the stimulated radiation and emit a powerful beam. A crystal rod that can radiate laser light is called a laser crystal rod.
Laser has good directionality, monochromaticity and coherence, and due to these characteristics, it is widely used in all aspects of society.
The crystal laser consists of two parts, one part is the activated ion as the "light-emitting center", and the other part is the host crystal as the "carrier" of the activated ion. The most important of the matrix crystals are oxide crystals, which have unique advantages such as high melting point, high hardness, and good thermal conductivity. Among them, ruby ​​and yttrium aluminum garnet (YAG) are the most widely used, and there is a host crystal called "color center", which exhibits a certain color due to their lattice defects that absorb visible light in a certain spectral range, thereby Achieve tunable laser oscillation.
In addition to traditional crystal lasers, crystal lasers are also developing towards the extremes of ultra-large and ultra-small. Ultra-large crystal lasers are mainly used in laser nuclear fusion, laser isotope separation, laser processing and other fields. Ultra-small crystal lasers mainly refer to semiconductor lasers. Because of their high pumping efficiency, small thermal load of crystals, stable laser output and long lifespan The advantages of long, small size of the laser, so the good price and quality Alexandrite rod has a huge development prospect in practical application.

What are the properties of Alexandrite rod products and their applications

What are the properties of Alexandrite rod products and their applications